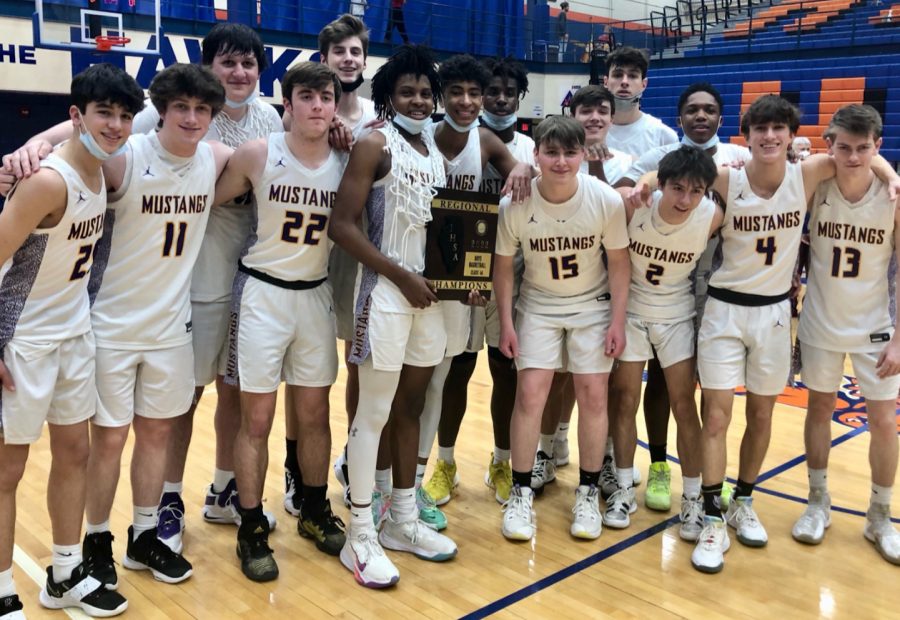 What a year! The boys Varsity basketball team ended with a 28-6

record. The 2021-2022 was a very special season and one not to forget. I asked Head Coach Kevin Katovich and players some questions about this season and this is what they had to say.

When asked who the biggest play makers were, Katovich mentioned

Junior Cameron Christie, Senior Orlando Thomas, and Junior Mark Nikolich-Wilson. They were all named to the All-Area Team. Christie averaged 22 points on 50-40-90 shooting (50% from the field, 40% from three pointers, 90% from the free throw line). Thomas averaged 20 points per game, 7 rebounds per game, and 5 assists per game. Nikolich-Wilson had many vital steals, blocks, rebounds and points for the team.

When I asked the players what their favorite moment was this season,

all of them said,

“winning the Regional Championship.” They beat Hoffman Estates 59-56 to win the title for Rolling Meadows for the first time in 21 years.

When I asked Katovich to describe the season in one word he said,

“entertaining.” This team had amazing chemistry on and off the court. They were always looking to pass. When I asked Thomas what he was going to miss the most he said,

“being around my teammates and making jokes.” When I asked Katovich what he will take away from this season into the

next season he said,

“the hard work and dedication that the 5 seniors demonstrated throughout the season.” Although not all of them got a lot of playing time, every time they stepped on the court they gave it their all, whether that was in practice or the games.

Freshman Ian Miletic, Junior Foster Ogbonna, and Junior Tsvet Sotirov all plan to play in college. All of them are still undecided but are hoping to go Division I.

and how our incoming freshmen do next year! We are thrilled to see what the next season may bring us!